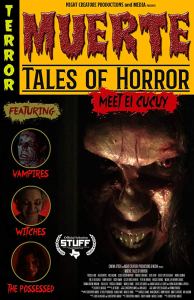 Synopsis: A dark plot is told through a series of short stories blending horror, sci-fi, and supernatural.

Pros:
• An engrossing set of stories that somehow used its low budget as an advantage, throwing off the viewer in very specific ways.
• The antagonists went all the way in their evilness, fully embracing what they were. El Cucuy was especially fun.
• Whether it was a mix of lighting, low budget wit, or effective acting, the creatures were equal parts dark fun and horrific. The level of gore was reminiscent of The Evil Dead franchise.
• Ultimately a surreal and uniquely implemented fever dream that sucked the viewer in, and provided a darkly satisfying conclusion.

Cons:
• Even though it often seemed intentional for the story, sometimes the acting on the side of the protagonists and victims was a bit unconvincing.
• The apparent time shifts stretched the suspension of disbelief, thanks to 2010s’ tech and cars regardless of year depicted.
• The clear ambitiousness of the film might have been a bit beyond its budget.

Discussion:
This independent film showed how the right kind of storytelling can make overused genre tropes feel unique. There was quite a lot happening here, if one paid close attention. The individual stories both blurred and clarified the sliding scale of good and evil. They were effectively implemented to create a world with unseen darkness, while showing that darkness was unlikely ever to go away. In many ways, this film was very primal. Most characters either fell prey to their baser, unsavory instincts or were destroyed by those that did. There was lightness, but not necessarily much. If we can take anything from this film, happy endings can be of pure evil.