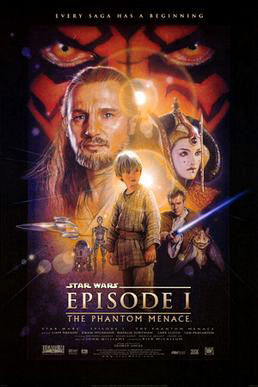 Synopsis: 32 years before the events of A New Hope, Episode I follows a young Obi-Wan and his Jedi Master Qui-Gon Ginn, who finds a young boy unusually strong in the force.

Pros:
• Was an overall action-packed story.
• Though not yet scene-stealing, the younger Darth Sidious (again played by the masterful Ian McDiarmid) added much needed authenticity.
• Ewan McGregor largely succeeded in taking over the role of Obi-Wan, albeit with less gravitas.
• Jedi Master Samuel L. Jackson (Mace Windu).
• Liam Neeson made Qui-Gon a worthwhile character for the film’s story.
• Darth Maul largely succeeded in representing the coming darkness.
• George Lucas continued to prove his mastery of visuals. The ships and related were truly remarkable in not just their variety, but also their artistry.
• Objectively, the overall story of this film could not have played out much differently.

Cons:
• Failed to overcome many of the origin-prequel story issues, creating a distinct lack of peril.
• Qui-Gon was ironically somewhat forgettable, as were many of the new characters. Jar-Jar Binks was somehow more grating than any of the continued moodiness of the Skywalkers.
• Lacks any character like Han Solo to tell the audience that the filmmakers had an awareness of how silly this can be at times.
• Perhaps has some of the worst, most forgettable dialogue of the whole series, including the Holiday Special. The heavy exposition exacerbated the issue.
• Adding a scientifically quantitative aspect to Force Sensitivity might have been interesting on paper, but was largely redundant.

Discussion:
It might be somewhat forgotten now, but the prequels were certainly polarizing to both fans and critics (still is). Like with the sequels, hype, nostalgia, spin-off media, and irrational fan theories certainly all played to the negative reactions. 1999 being a time with far less internet trolls and quieter Skywalker-esque whining was probably for the best. Plus, the film not really creating its own nostalgia helped to ensure some retrospective objectivity toward it and its execution.

The prequels were two fold in their execution: reinventing the path, while really doing nothing to change it. As comedian Patton Oswalt once said, the prequels were a time when we calmed down and focused our shady schemes on politics, and the sequels were us going back to doing coke off lightsabers again. That was the only truth that George Lucas could follow. We already knew the story from different points of view, so Lucas set out to show us the objective reality of Anakin Skywalker’s fall: a very drawn out path to darkness.

One thought on “Star Wars: The Phantom Menace”