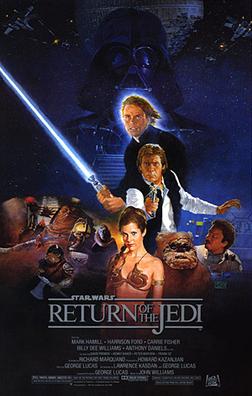 Synopsis: The Empire is constructing a new, larger Death Star to crush all rebellion, while Luke learns he must confront his father, Darth Vader, without falling to the Dark Side of the Force.

Pros:
• An overall strong trilogy finale of one of the most famous space operas of all time.
• Everyone seems quite comfortable in their roles, especially when their character’s resolve was tested.
• The dialogue was largely passable, particularly Han Solo’s observant commentary.
• Leia’s slave outfit may be notorious, but she killed the slug that put her in it.

Cons:
• Minor characters like Boba Fett have an almost irrational following now.
• Though nostalgia might suggest otherwise, the film might not advance past the cinematic extravagances of its predecessors.
• The interpretation of Darth Vader/Anakin being redeemed by assassinating the Emperor does not make much sense.

Discussion:
In some ways, this was the most cerebral entry of the original trilogy, particularly the dual between Vader and Luke. Most events of the film were largely influenced by the Emperor to ensure complete victory. It was a truly elaborate gambit, while he was understandably overconfident: I’m afraid the new Death Star’s weapon was fully operational after all. Looking back, seeing Vader use words as a weapon to turn his son to the Dark Side — with the Emperor’s big echoing smile — was truly twisted.

However, the oddest thing surrounding the film was the apparent assumption that Anakin Skywalker was fully redeemed by killing the Emperor. That assumption objectively makes little sense. As the left hand of the Emperor, Vader may have murdered millions or even billions. He certainly sacrificed himself to save his son, who proved stronger than he was at that age, but that cannot take back the genocidal atrocities he committed as a Dark Lord of the Sith. All Vader/Anakin did was end a madness with what little good was left in him. Looking to video games like Knights of the Old Republic (2003) — or even just the original trilogy — suggests that those truly strong in the force often return as a kind of ghost, and Skywalkers were quantifiably some of the strongest the galaxy ever knew and knows. So, Anakin Skywalker might now be in a hell of his own making: eternally with those he failed long ago to eventually look upon his nostalgia-blinded grandson in shame.

That debatable dark interpretation does not take from the fact that Return of the Jedi was a fitting end to the original trilogy. It contained some of the best performances from the main actors up to that point, making up for any of George Lucas’ weaknesses as a writer. The legacy of the film was permanently engrained in pop culture. This film was not to be the last Star Wars, as Lucas himself mapped everything out to a degree. Indeed, much of the plot of the sequel trilogy came from Lucas’ outlining a long time ago in a galaxy far, far away …