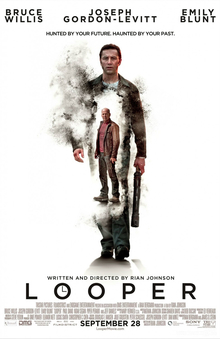 Synopsis: In 2044, assassins are contracted to kill people sent from the future, with the final mark being themselves.

Pros:
• An overall unique time travel story dealing with issues of time loops vs free will.
• Far more about the characters than the convoluted “rules” surrounding time travel.
• Bruce Willis (Old Joe) and Joseph Gordon-Levitt (Joe) powered the film’s colliding narratives.
• Directly showed the possible consequences and conundrums of the contrasting goals of the main characters.
• Not only taunts how some people might act with telekinetic abilities, but also suggests the wildly differing paths such people may take.

Cons:
• The harsh and direct nature of Rian Johnson was not for everyone.

Discussion:
Rian Johnson is a filmmaker that makes films about characters in the most difficult of situations. He leaves the solution to the characters, all of them, who must find their own path different from any choices anyone else might make. The ultimate question posed to the audience is if their choices were correct, no matter how much the paths were shifted. Such philosophical applications might have been too much for certain factions of the Star Wars fandom, yet being forced to choose something different when the prior choices only led to problems is an aspect of life.

In Looper, Joe’s future self escaped to change everything, because he thought the prior actions were wrong. Joe’s present self suggested that such changes should never occur. Indeed, Old Joe became the darkest version of himself to kill a child that becomes a monster in the future.

Fourth Doctor: Just touch these two strands together and the Daleks are finished. Have I that right?
Sarah Jane Smith: To destroy the Daleks? You can’t doubt it.
FD: Well, I do. You see, some things could be better with the Daleks. Many future worlds will become allies just because of their fear of the Daleks.
SJS: But it isn’t like that.
FD: But the final responsibility is mine, and mine alone. Listen, if someone who knew the future pointed out a child to you and told you that that child would grow up totally evil, to be a ruthless dictator who would destroy millions of lives, could you then kill that child?
SJS: We’re talking about the Daleks, the most evil creatures ever invented, you must destroy them! You must complete your mission for the Timelords!
FD: Do I have the right? Simply touch one wire against the other and that’s it. The Daleks cease to exist. Hundreds of millions of people, thousands of generations can live without fear, in peace, and never even know the word Dalek.
SJS: Then why wait? If it was a disease or some sort of bacteria you were destroying, you wouldn’t hesitate.
FD: But if I kill, wipe out a whole intelligent life-form, then I become like them. I’d be no better than the Daleks. [Chose to not genocide the Daleks]

In many ways, Genesis of the Daleks represented a possible failure on the Doctor’s part that led to arguably the greatest success of his future selves, saving Gallifrey (and everything) from corrupt Timelords and Daleks instead of burning them all to nothing. Looper’s Young Joe came to see a new path by the end, but the choice was perhaps far darker then the Doctor’s: kill himself to save the future. He would never know if he truly succeeded in preventing the creation of monsters, but there can be hope in uncertainty.