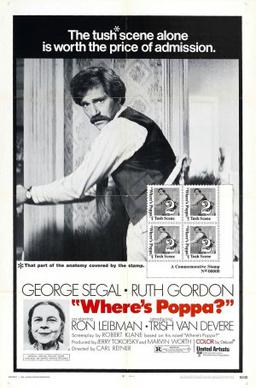 Synopsis: A lawyer has a deteriorating relationship with his senile mother, and tries to kill her to save his questionable sanity.

Pros:
• A strongly implemented story with a truly shocking yet emotionally real plot.
• Easily one of the most Freudian dark comedies ever made.
• Anyone who has lived with elderly relatives can relate to some degree.
• Provided an interesting indictment and caricature of 1970 New York City, particularly of those living there.
• Most of the humor still holds up to early twenty-first century tastes, if only because its truly black humor was likely radical for the time.

Cons:
• The dark, harsh, and direct themes might not be for everyone.
• Its somewhat old fashioned implementation, for lack of better words, made the film have a rather dated feel for today.
• Though not without its moments, was not the truly madcap film nostalgia would suggest.

Discussion:
Carl Reiner, along with others like Mel Brooks, were clearly out to push forward comedy. They certainly liked what came before, but moral codes were strong by the 1960s (see the now defunct Comics Code Authority). Indeed, Where’s Poppa might just be barely rated PG-13 instead of R today for the adult language and dark theme. Regardless, the heart of the film was very real, no matter how dark and selfish. What do we do with our older relatives, who are driving us insane? We might think about that question more than we would like to admit, while perhaps think about it more if they are in that nursing home. Perhaps all we can do is darkly laugh at how there may be no truly good answer.