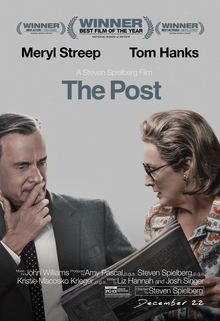 Synopsis: The Pentagon Papers detailing the lies and political manipulations surrounding the Vietnam War are leaked to the press, and the New York Times and ultimately the Washington Post spearhead the reporting of the classified documents.

Pros:
• A well acted depiction of events remarkably overshadowed by the directly connected Watergate Scandal.
• The whimsical Spielberg feel drives the film.
• The occasional self awareness in the script, particularly the musing at the end of the improbable likelihood of publishing such dramatic news again (Watergate).
• There were strong feminist themes.
• Seeing the delay and careful consideration of news publishing in the 1970s was genuinely interesting next to the constant and rushed bombardment of news today.
• Nearly every element of the film and depicted events were still relevant today: Executive Power vs free press, political manipulation of the public.

Cons:
• It being based on historical events made much of the tension almost artificial.
• Even if every detail of the depicted events are not well known, the fact that the Washington Post still exists — and the free press in general — negates any genuine surprises in the plot.
• Can feel a bit one sided, largely depicting the view of just the Washington Post.
• Though the film is surely more accurate than many of its type, what changes were made for the sake of the approx two hour film can be a distraction.

Discussion:
The truly interesting aspect of this film was in how it felt like a true historical artifact discussing something meant to be a historical artifact. The lies, events, and political manipulations could not be changed, but the people had the right to know. It was also interesting how the film exemplified not only how the free press revealed truths, but also how they were manipulated themselves. Kennedy was indeed known to have an overly positive relationship with the press arguably never seen again. It all came off as a full-fledged conspiracy, but as the film suggests, the press and people were merely lied to. Lies and manipulations are still common today right up into the Executive, but the difference is in how we are less surprised by it all. Lies are a more dangerous game for today’s politicians, but they can be more readily held accountable. There were many lessons here surrounding the Pentagon Papers and Watergate, but there may unfortunately be more to learn.