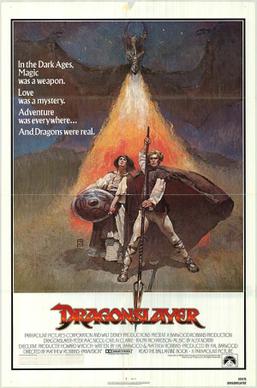 Synopsis: An inexperienced sorcerer’s apprentice faces off against a fire breathing dragon in this fantastical cult film.

Pros:
Beautifully filmed with a talented cast, and subtly self-aware. Has its own narrative twists. Victory was not down to just a single character. There is an often strong attention to detail, right down to the classical Latin pronunciations. The practical and special effects hold up surprisingly well, as the cheat of not always showing the dragon was done with strategic flair.

Cons:
Might try too hard to twist the well-trodden genre. The overall plot is still somewhat predictable, in spite of the narrative twists. Almost tries too hard to prove it is not a family film through the violent sequences.

Discussion:
Like most cult films, Dragonslayer never intended to be as such. The film was built to give the audience a sense of something new while still feeling comfortably familiar, yet it came and went, not really being a family friendly fantasy. Such narrative constructs were made popular by the first Star Wars film in 1977, and in the 1980s with Empire Strikes Back (1980), The Return of the Jedi (1983), the Indiana Jones series, and even the Star Trek films. Indeed, we have seen a revival of sorts for this kind of same yet updated narrative. Star Wars and Star Trek have returned, as the market continues to be fruitful for nostalgia, for good or ill.

Dragonslayer has its own uniqueness, in that it is neither a sequel nor a remake. We have certainly seen many of these characters before — the virgin sacrifice, the corrupt king, the dragon, the sorcerer, the hero, but the film knew what it was doing with them. The lasting legacy of this kind of film, however, was in the details: an arguably accurate eclipse, correctly used Latin, consequences, sacrifice, hubris. We are allowed to feel for the dragon that lost her young, to agree with the selfless princess and corrupt king, and to not always like Galen, the default hero, in favor of his wizened Magister. The dragon was far from benevolent, but the risk of ending the technically successful agreement was indeed great. Such plot elements make a film a classic, no matter how familiar the narrative.