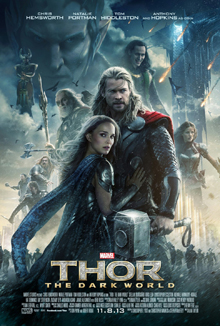 Synopsis: Thor teams up with his adopted, often villainous brother Loki to save the universe from the Dark Elves, who seek the infinity stone known as the Aether.

Pros:
Beautifully filmed with a game cast. The surreal moments with the Aether makes the dark heart of the film. Largely satisfying ending.

Cons:
Lacks much of the fun and whit of the first Thor, or at least lacks much memorable humor. Seems more a vehicle for an Infinity Stone, while there is never really any sense of peril. Other than the Aether, this has a somewhat forgettable story.

Discussion: This second film in Phase 2 of the MCU had a bit to live up to. Phase 1 worked well, Iron Man 3 was a strong intro to Phase 2, and Agents of Shield started strongly. In that context, Dark World is a bit of a disappointment, becoming the Iron Man 2 of the Phase. Still, this is a more than watchable piece of science-fiction. It seems filmed in a way that assumed it would be taken on its own, even though it is overwhelmed by the overarching mythos. The film ultimately gives the sense of moving along.